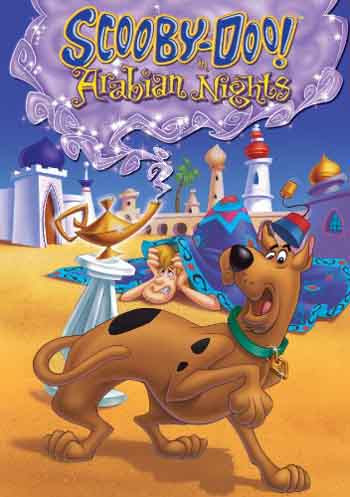 Story… Scooby and Shaggy tell an Arabic Caliph two stories, the first about Aliyah-din, a young girl aided by two genies played Yogi and Boo-Boo and the second about Sinbad the Sailor played by Magilla Gorilla.

A Hanna-Barbera fan, I rented this movie, but thought it was going to be “lame-o”. It can get rather disinteresting, these type of stories where they take a familiar tale, and put characters familiar from another source in the roles. You know, like all those sitcom cast retellings of Charles Dickens’ “A Christmas Carol”. Actually, the film turned out to be quite fun. Shaggy (in drag) has to tell stories to a prince, who sounds exactly like Mandark from “Dexter’s Laboratory”, which amused me. One story is a gender-reversed version of “Aladdin”, with a girl named Aliyah-Din as the poor heroine who must win her royal man. Despite the presence of Yogi Bear and Boo-Boo as genies, the story can actually be taken pretty seriously. Then Magilla Gorilla stars as Sinbad, in a hilarious parody which includes a surprising send-up of Disney’s Pirates of the Caribbean ride! As a Disney theme park fan, I was howling with laughter!