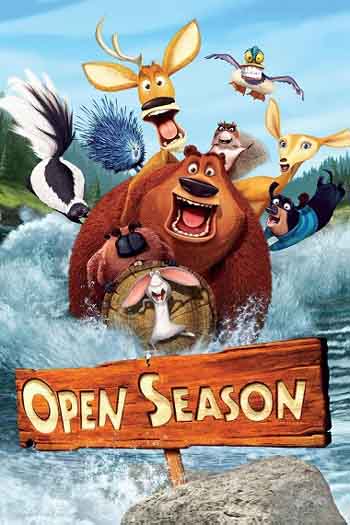 Story… Boog, a domesticated 900lb. Grizzly bear, finds himself stranded in the woods 3 days before Open Season. Forced to rely on Elliot, a fast-talking mule deer, the two form an unlikely friendship and must quickly rally other forest animals if they are to form a rag-tag army against the hunters.

I will admit Open Season isn’t outstanding, but it was likable and fun. It is too short however, there are some predictable parts in the story and it occasionally feels too rushed. That said, it looks wonderful, with some lovely backgrounds and colours and the character designs are agreeable. The soundtrack is cool, the script has its funny moments with some of the more adult humour decently done and enough wit to satisfy anybody and the characters are likable especially Grizzly. Also the voice acting is surprisingly good, I was surprised at some of the choices(ie. Billy Connolly) of those to do the voices but all breathed life more than adequately to these fun characters. Overall I liked it, it was flawed yes but it was fun, that’s all that matters at the end of the day. 7/10 Bethany Cox