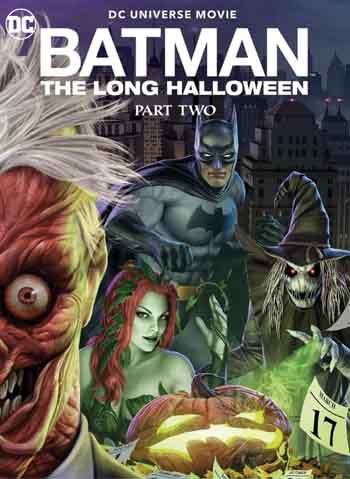 Story… The killer known as Holiday continues to stalk the Falcone crime family while a new class of costumed criminal rises in Gotham City. Batman suspects that a former ally might be the serial killer.

Mismatched part 2 of this film series was a letdown. I didn’t have high expectation after reviewing the first part. I went into this knowing the animation quality but with this I feel the story broke apart and could feel the accusatory finger jabbing at the audience with agenda moments. felt like they lost touch with the theme to the first, which seemed more reminiscent of Detective Comics.

One of the lines that proves some weird agenda was , “Mother’s Day, this one almost slipped by us.” What?! Mother’s Day is bigger than Father’s Day, even by commercial standards, not many people forget Mother’s Day. So, why add that line? Even then, Batman goes even weaker for this part 2 than he was in the first. Which is hugely disappointing to watch such an icon fall so far.

“Rookie Batman” gets whammied by Poison Ivy, sucker stuck by Scarecrow, bashed by the Hatter, and more. Meanwhile, Catwoman is the heroine of the series. At the same time this is just another origin story although a different take, it’s played out interestingly it just felt like the same story all over again. Unless you’re an super-fan skip this cash-grab.