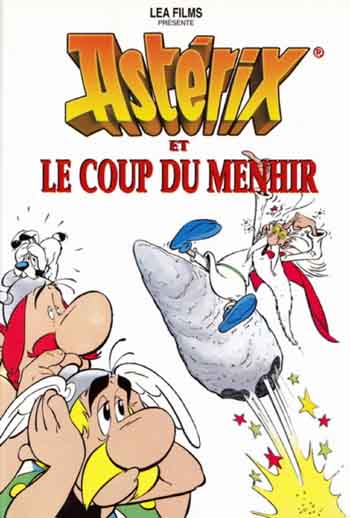 Story… The druid is accidentally hit by a menhir thrown by Obelix and loses his mind and memory.

“Asterix and the Big Fight” concludes the second movies’ period of the famous little Gaul. This statement is inaccurate but I’ve never really paid attention to the 1995′ “Asterix conquers America” or “Asterix and the Vikings” made one decade after, and I’m fine with that. These two films failed to capture that spicy wit that made the Asterix’s adventures so enjoyable, the lameness of their songs and the Americanization of their plots betrayed the marketed intentions of their makers. In others words, these films didn’t have the secret ingredient of the magic potion.

And neither does “The Big Fight”, but that’s only because it’s part of the plot. It starts with the Roman soldiers who had the misfortune of meeting two Gauls in the forest well, not quite, as they try to explain to their centurion, there were not just two Gauls, they had one dog, plus two wild boars, so technically, they were five, what a relief: the honor is safe. Romans are much aware that the Gauls owe their force to the magic potion and therefore they plan to kidnap the druid Getafix. But their plot fails thanks to Obelix’ providential intervention. He throws a huge menhir at them, convincing them to run away. But gravity is a bitch, and it’s on poor Panoramix that the big rock concludes its doomed trajectory.